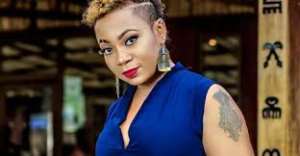 Ghanaian Actress Vicky Zugah has charged married women who go about beating their husband’s side chicks to stop that act.

In a video posted on her Instagram page on Tuesday and sighted by ModernGhana, the beautiful actress said husbands who find it difficult to zip their pants are the ones to be disciplined and not the side chicks.

“So the wives who go over to their husbands side chicks home to fight them what exactly is your motivation because me I don’t understand. You risk your life by going to another person house to fight her, do you know you can be arrested. The only person to be blamed is your husband! Tame your husbands and stop attacking innocent women,” she posted.

She argued that beating side chicks will not stop husbands from chasing other women, but rather taming and prayers will stop them from engaging in the ungodly act.

The mother of two further advised married women to pray for their husbands.

The Ghanaian actress after many disappoints in relationships is recalled to have stated that marriage is no her priority in a recent interview with Graphic showbiz.

According to her, she would rather be single than to be married.

Below is a video of what she posted:

Strange creature Videos They Tried To Erase From The Internet..