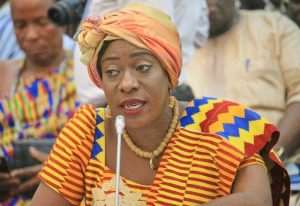 The Tourism Minister Catherine Afeku has told Parliament that the Kintampo Waterfall has now been secured and enhanced.

She said her ministry had undertaken various works to renovate the site and make it more exciting and appealing to tourists.

Twenty students died, and 21 others sustained varying degrees of injury when a tree, broke off, at the top of the waterfall and fell on the students who were then, swimming beneath the waterfall.

The March 2017 disaster prompted a parliamentary investigation which revealed that a lack of early warning mechanisms and an emergency response team was among the challenges that accounted for the high casualties recorded.

The waterfall was temporarily closed down while renovation and other developments were undertaken at the site to make it better upon its reopening.

Months later in November 2017, the Vice President, Dr. Mahamadu Bawumia reopened the refurbished site with a charge to authorities to exhibit good maintenance and accountability culture, as a way of demonstrating appreciation to God for the gift of the waterfalls.

The Parliamentary Committee on Trade and Industry and Tourism after a presentation of its own report on the incident recommended amongst other things an immediate afforestation exercise be carried out to improve the diversity of the flora at the waterfall.

Catherine Afeku after the presentation of the report assured the House that the site was not safe and urged MPs to endeavour to patronize the site.

“We have a mesh wall to avoid encroachers, we have a security fence and gate. Trained tour guards paid by Ghana Tourism Authority. We have instituted a first aid building right at the foot of the falls and also renovated a weak staircase that was constructed in the 1970s.

“As of last week, we have added a canopy walk to enhance the attractions of Kintampo. There are now more activities with areas such as camping sites. Trees have also been planted. What is important is that, Kintampo Waterfalls is safe and it is back and we entreat all members to patronize our tourist sites,” she said.

Other recommendations of the committee

Other recommendations by the Parliamentary Committee on Trade and Industry and Tourism are;