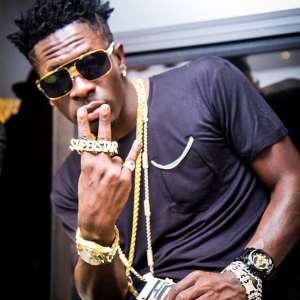 A few days ago, in an interview with Kassapa FM, Ghana’s Dance Hall Artist Shata Wale indicated that in his opinion, Wizkid isn’t the biggest artist in Africa and that he doesn’t rate him as a superstar.

The backlash he has received from Nigerians and Ghanaians alike is a perfect indicator of why our local artists don’t get the kind of rise their talent deserves.

In my opinion, the Ghanaian culture of pull him down is a major cause of our regression in the entertainment sector and will forever keep us in the periphery if we don’t learn how to support our own through thick and thin.

Why in the world should Shata Wale rate another artist over himself if he believes that he is superior to the said artist and why should a Ghanaian feel offended that his compatriot rates himself ahead of a fellow from another country.

Admittedly, Shata Wale could have accorded Wizkid more respect than he did because he is in truth an artist making the whole of Africa proud at the world stage.

However, there’s no way I will accept that Wizkid is better than Shata Wale, Sarkodie or even his own countryman Davido. It is a matter of choice because there is no barometer for measuring greatness.

The problem we have in Ghana is that we don’t have the numbers to propel our artist to the top because to do that requires massive resources.

Sarkodie, Ghana’s most popular artist on the video site and an artist rated as one of the very best on the continent rarely gets past 10 million views with the exception of his song Adonai which attracted over 40 million views

His song, Pain Killer, by far the most watched video from a Ghanaian artist has 8.8 million views as at yesterday; the second, Shata Wale’s Taking over has 5.1 millions views. Run Town’s Mad over you has 55 million views. Not because he is better or his song is better. It is because by ratio, Ghana’s population to that of Nigeria is 1 is to 6.

This is what Ghanaian artists are up against

Kwame Eugene’s Angela, a song that Wizkid will be proud to add to is his lists of hits is doing less than 2 Million on YouTube. He’d have exceeded 40 million if he is a Nigerian.

If you care to know, artist get paid for the views they generate from Youtube.

Wizkid may be the most popular artist now but the truth is that Nigerians abroad alone can make an artist a hit internationally. If we had the same numbers and similar attitude, our artist would have done better because we have the talents.

These are the things we should look at when we compare our celebrities to those from Nigeria: the playing field has never been level

Add that to our knack for hating our own to the support our Nigerian counterparts enjoy and you’d know that the stars we have are the best.

In this country, some DJs and presenters sometimes collectively blacklist an artist, movie producers agree to destroy the career of an actor by not working with the said actor again. Kweku Manu, Agya Koo are victims of such conspiracy and the result is there for all to see

Nigerians rate Okwocha, a player whose showboating eclipses his end product on the field of play than Abedi Pele, arguably the greatest Africa Player. To them everything that comes from their country is the best. If nothing at all, we can learn these qualities from them because that is how nations develop and stars are built.

Shata Wale has the right to rate himself high: he is better than Wizkid as far as Dance Hall is concerned

If we don’t blow our own trumpet, no one in this world will do so for us. It is part of the culture of showbiz for people to best themselves. Even new artist sing their praise the best themselves in their maiden albums.

In view of this, since I am writing about showbiz, I want to say categorically that ‘I am by far the greatest writer the world has seen and will ever see: this is how I see myself; if you disagree, you know what to do to the sea.